“Fight Hitler While You Still Can”: An Interview with Screenwriter Arik Bjorn


Arik Bjorn is a friend and Forward Progressives writer colleague. Given the political nature of so much of our writing, and his own personal interest in/and everything related to The Viking World, I was very interested to learn that he also has a purely creative side, as if the other isn’t creative enough. This is different though, one that digs deep into little known histories and issues of social historic interest.

It also surprised me to learn that Arik was also a screenwriter, and was actively marketing a script. But more than that, the story he was trying to tell is that of Hans Litten, one of the first prisoners in Hitler’s concentration camps. At that point, I had to know more. I didn’t honestly know a thing about screenplays, and even less about Hans Litten, nonetheless, he agreed to the interview. First, take a look at the teaser clip from the screenplay and then, we will proceed into the interview.

Litten's Passion: a screenplay teaser from Palmetto Pictures on Vimeo.

Can you give us a little background on the story?

The tagline we’ve decided upon for Litten’s Passion is “The Forgotten First Victim of the Holocaust.” Litten’s Passion is one of those stories, kind of like a snake nut can—the second you pop off the narrative lid, this unbelievable story emerges. It’s one you can’t put back in the can once you’ve heard about it.

In short, Hans Litten was an intellectual German attorney who interrogated Hitler in court two years before he became Fuhrer. Litten humiliated Hitler during the trial and nearly changed the course of history by exposing the criminal activities of the Brown Shirts. In the end, however, the Nazis ducked and dived and forced their way to power. And Hitler arrested Litten (and several other main political threats) the night the Reichstag burned down in February 1933.

Hitler still hated Litten passionately for being humiliated before the entire nation in court. Remember, this was years before the Final Solution, and he told Litten: “You were the first to be arrested, and you’ll be the last to be released.”

But that’s just the beginning of the story—a story almost altogether forgotten outside of Germany. The book Crossing Hitler was published two years after we registered the screenplay, but I’m fine with that. The story should be remembered in multiple ways and from multiple perspectives.

Anyway, even though the general public now has some broader access to information about Litten’s life, there’s much more to the story than even has recently been divulged—which certainly adds to the recent publications about Litten’s life.

How did you come up with the idea or even learn about the first Concentration Camp victims?

We often forget that Hitler came to power in 1933 and that the Final Solution was a plan—I hate to use such a benign term to describe it—that evolved over time. World War II itself didn’t begin until 1939, remember.

The first wave of political prisoners, which included Litten, were originally held in Spandau Prison in Berlin. (Spandau was finally razed in 1987 after Rudolf Hess died there.) To my understanding, the camps evolved over time as Germany ran out of prison space to hold all of the political prisoners—then became almost a macabre cottage industry of ridding German society of “undesirables.”

Litten was a famous political prisoner and was transferred to many different camps, including, if I remember, Brandenburg, Papenburg-Esterwegen, Lichtenberg, Buchenwald, and finally to Dachau. I think there were others. At Dachau, he was finally made to wear the “yellow spot,” he was Jewish. He was murdered at Dachau on February 4, 1938.

As to how I learned about Hans Litten, well, that’s the catch. I came upon Litten’s life accidentally. At the time—and this was back in the early 2000s—no one outside of Germany knew who Hans Litten was. Then I stumbled upon this buried archive. I contacted some famous historians who were shocked to learn what I had discovered about Hans Litten.

I immediately realized I had discovered a narrative lost treasure. My background is in history, but ancient history. I had been to Yad Vashem and had done some reading on the Holocaust, but World War II and Holocaust Studies were an ocean of unfamiliar literature for me. Nothing to do but dive in and sink or swim.

At any rate: the catch is, once I make public what the “secret” part of the story is, it’s fair game in storytelling land. So I’ll have to hold that somewhat close to the vest for now while we shop the script to studios.


So you learned of this story and you decided to write a screenplay?

Yes, I immediately started researching the story. I had just finished a novel that I had spent seven, eight years writing. So I was ready for a new project. I created an outline and storyboard and started building scenes and crafting dialogue. Then, almost by miracle, I stumbled upon two screenwriters in Louisiana who were also writing a screenplay about Hans Litten. I introduced myself to them, my project—and, most importantly, the “other” part of the story that no one else knew.

It was a leap of faith. But we were all shocked that there could be two such projects in the world. We decided to join forces and united my screenplay to theirs. It felt like fate.

What kind of research did it take to write this?

Well, I’m a librarian by training. This was the easiest part for me. Or at least the most fun.

I read everything, from Mein Kampf  to biographies of all the political prisoners Hitler rounded up in the aftermath of the Reichstag burning. Men like the socialist playwright Erich Muhsam. Carl von Ossietzky, who actually later won the Nobel Peace Prize while a concentration camp prisoner. Human rights leader Kurt Hiller, all of these knew each other. Most of them were severely tortured and murdered in camps.

I also spent a lot of time just staring at period photographs and reading news clippings. It’s important to know things such as, in 1937, Snow White was released, The Hobbit was published, Chamberlain became the British PM. And in the same year Litten was transferred to Dachau. It puts the story in a narrative context.

I have this remarkable Picture Post newspaper clipping that I acquired, with a photo of Hitler in the courtroom the day he was interrogated by Litten. Hess is in the background of this photo.

I also spent a lot of time emailing historians and archivists as well. We credit one of the researchers at the Holocaust Museum in Washington who helped us wade through some tricky information labyrinths.

One of the early hard decisions was limiting the number of physical sites in the film. Litten was in so many camps, but for a film, you have to narrow down scene sites. It’s just a part of that craft, but the researcher in me hates things like that.

I like your question, though. I look back on that period now—I was definitely obsessed with the subject. I could do that kind of work forever.

I notice there are several other writers involved in the project. Can you tell me a little bit about the other people involved, your cohorts?

Sure. My two co-writer colleagues are Debi King McMartin and Evelyn “Lyn” Morgan. They’ve been working together as a screenwriting team for years. Debi and Lyn have partnered on several optioned and produced screenplays, including the book and screenplay titled Stone Justice, the true story of the only woman ever executed in the electric chair in Louisiana.

At first, I wasn’t certain what it would be like to write with other writers. Writing for me is a very private—almost hermetic—craft. But they’ve been a pleasure to work with, and they both sure know a heckuva lot more about the film industry than I do.

Is there anything else you would like to add about this project?


Wow. There are so many things. But I can probably narrow it down to one.

Early in my research, I purchased a book by Irmgard Litten, Hans Litten’s mother—it’s one of the few books ever published about Hans Litten. It’s entitled A Mother Fights Hitler. While the rest of the Litten family fled Germany after Hans’ arrest, she stayed behind to fight for her son’s freedom. Irmgard is one of the main characters in the film, by the way.

Anyway, when the book arrived, I removed the dust jacket to place it in a preserving wrapper, and I noticed that the endpaper was inscribed by Irmgard. The inscription reads: “Fight Hitler while you still have time. Irmgard Litten. July 22, 1942.” (That Picture Post clipping of Hitler I mentioned earlier was in the book, too.)

It’s little moments like that that make you feel like a story is simply destined to be told to a broader audience. Irmgard did everything a mother could do to keep the story of her son alive. It felt like a message out of time to me.

And in 2014, with the world as it is, the story of Hans Litten remains incredibly prescient. 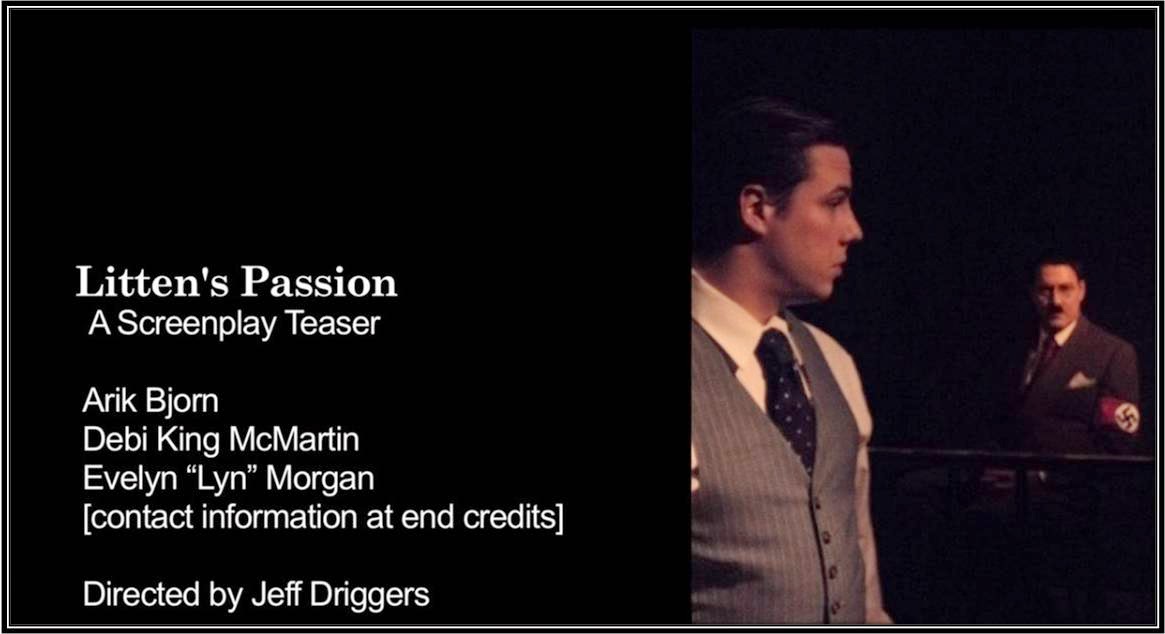 A description of Bjorn’s manuscripts, including Litten’s Passion, may be found at his website The Viking Word.
Posted by Regina Garson at 8:43 PM

Regina Garson
A behavioral scientist by training, an activist by heart, and a writer and editor by trade, Regina has covered a wide range of social and political issues, including national politics, equality and diversity, labor and workplace, women’s issues, personal growth, and space, like aerospace, although space is not actually an issue, or maybe it is. She has degrees in Behavioral Science and English from Athens State College/University and Advertising/Communications from the University of Alabama.